What: Twin Peaks: Conversation With The Cast

Time to start scoping out Australia’s best spots for cherry pie and a damn fine cup of coffee.

Five members of Twin Peaks‘ original cast will be heading to your city to discuss and answer your burning questions about the cult classic. 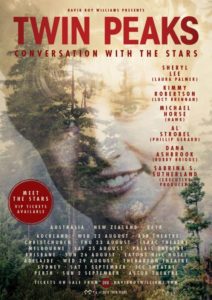 Although writer, director, and all around enigma David Lynch will not be on hand for the panel, we can expect appearances from the actors behind Laura Palmer, Lucy Moran, Deputy Hawk, Philip Gerard, and Bobby Briggs.

To reserve your seat for the panel, set aside $79 to get all the goss you need. But for any die-hards with an extra $500 lying around, the event’s organizer is offering a VIP meet and greet package with all the extras you’d want for half a grand.

These are the tour dates:

In the meantime, feed your film thirst with a look into Quentin Tarantino’s latest project.