In what is basically that when you order it online vs when it arrives meme come to life, Nicki Minaj got Shanghaied.

The rapper had arrived, warmed up, and was apparently all set to perform at a music festival in the Chinese city. However, when her set time rolled around, she was a no-show.

Her fans apparently waited hours for the singer to take the stage, presumably ready to shout every word to Good Form along with their queen, before being told to pack it up and go home.

Nicki later hinted at the reasons for her ditching the show in a video where she apologized to fans and said she would return to Shanghai “with a better partner.”

Thank u Nicki! We are sooo sorry for what happened today and we love u soooo much! Plz come to Shanghai next time PLZ! @NICKIMINAJ pic.twitter.com/KPnzR4Id41

What exactly could Nicki mean by this? Apparently the festival was running under the guise of Djakarta Warehouse Project, a popular festival in Bali.

However, the actual DWP posted on their official website that it no association with the festival Minaj was headlining. 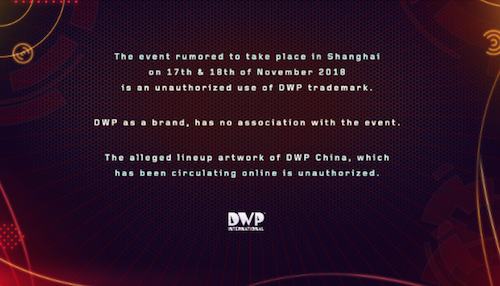 Nicki was also allegedly told that she would be performing to a crowd of around 3,000 people, when in reality she arrived to a smaller-than-expected venue and a crowd of 1,000.

Basically, Nicki flew all the way to China, prepared an entire 90 minute set, with a crowd of her fans waiting for her to take the stage, and then just turned around and went back home.

It’s pretty shocking that her team would allow this all to happen considering this was a problem that could’ve been easily avoided with a quick Google search. So for anyone who wants to blame Nicki for all this mess, just keep that in mind. We all know how they like to make her the bad guy.

We can at least vouch for FOMO Festival in Australia. See you then, Queen.